In advance of the #WeNurses Twitter chat on 7 May I am doing a couple of posts to summarise my #hospitalbreastfeeding campaign to date.  Part 1 covered what I got up to in 2014, and Part 2 (hopefully coming out on Monday) will explain what has been happening so far this year.  In between, I wanted to give you a flavour of a couple of articles relating to the campaign, one that I had published and one that highlighted the issue.

Thanks to the support of Doreen Crawford, I had an article published in the December 2014 edition of Nursing Children and Young People, an RCN journal.  Doreen is one of the authors of the RCN’s “Guidance for good practice – Breastfeeding in children’s wards and departments“, and the consultant editor of Nursing Children and Young People.  The edition of the journal in which I appeared also had a CPD article on “Supporting the establishment and maintenance of lactation for mothers of sick infants” which is well worth a look.

In her editorial Doreen wrote “To support a breastfeeding mother takes time and expertise; sadly, time is in short supply and expertise is expensive.”

My article was entitled “Breast isn’t best, it’s just normal”, which was a quotation from the text that the editors had picked out.  The key theme I wanted to get across in the article is the perception of breastfeeding amongst children’s nurses and the realities of what it can mean for a mother and baby dyad.  I wrote:

“The common perception of breastfeeding in our society can be summed up by the odious phrase “breast is best”.  The perception is that breastfeeding is an ideal.  A lifestyle choice.  A wonderful thing to do if everything is fantastic and straightforward in your life.

What effect does this perception have on the way the breastfeeding is viewed by some children’s nurses if you have a sick baby?  Well, of course, it is the last thing you want to be worrying about isn’t it?  You have enough stress in your life without putting yourself under pressure to breastfeed.  Far better to remove one area of stress and focus on other things.  When your baby is very ill, getting the ‘best’ food is not a priority, as long as they are eating something, right?”

The problem with this perception is that breastfeeding is the biological norm, the way that humans have evolved to feed their children.  Hence the quote “breast is not ‘best’, it is normal”.  Thank goodness we have the option of formula feeding when necessary, but I would hope that we all know by now that formula does not offer anywhere near as much to a child as does breast milk.

How a family chooses to feed their baby, any baby, is entirely up to them, and it is a decision that takes into account far more information and circumstances than the benefits and risks of one feeding option versus another.  However, if families do choose to breastfeed they should be supported across the NHS, not least because an increase in breastfeeding rates would save the NHS money!  As I put in the article, why breastfeeding matters to sick babies in particular becomes clear when you consider the following key information:

For the evidence base for the above, please see the Guidance section of my website.

The second article featuring #hospitalbreastfeeding was written by Dominique Mylod of the Faculty of Health Sciences, University of Southampton.  Kath Evans had suggested that I provide a write up to Professor Alan Glasper of that university, and he kindly passed on the information to Dominique, who was published in “Issues in Comprehensive Pediatric Nursing” (of which Prof Glasper is the editor in chief). 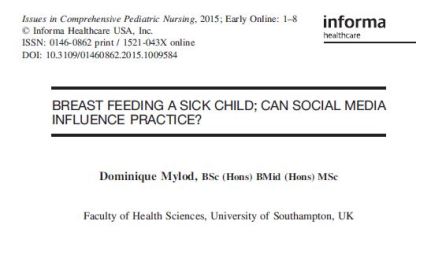 In her article, Dominique writes “The known protective influence of breast milk in preventing the onset of disease in later life is of particular import for any sick infant, but the user voice as represented by Helen Calvert’s Twitter campaign @heartmummy #hospitalbreastfeeding has united service user and professional voices to call
for improved breastfeeding support in pediatric care.”

She goes on to say “Although breastfeeding rates in industrialized countries drop markedly in the first 6 weeks, breastfed babies with cardiac conditions benefit from better oxygen saturations, faster weight gain, and shorter hospital stays.  Unwell babies are most in need of the benefits of breast milk. However, families and staff overcome physical barriers to the initiation and maintenance of breastfeeding, including lack of space, privacy, and separation of the maternal-infant dyad. Many women are motivated to breastfeed or express milk but are reluctant to approach health professionals for help and advice. Despite robust evidence and sound guidelines and policies, breastfeeding knowledge and experience amongst Child Health professionals is often inadequate and leaves them unable to support families.”

The full article explores the ways in which breastfeeding can be a key part of paediatric care, and looks in particular at the benefits to cardiac babies.  Dominique raises the issue of breastfeeding being “tiring” as I had been discussing on Twitter: “It is a common misconception that babies with cardiac conditions find breastfeeding more tiring.  In fact, they have better oxygen saturations than bottle fed babies. When unhampered by restrictive feeding practices, they gain weight faster than artificially-fed babies and have shorter hospital stays (Combs & Marino, 1993).”

I would urge anyone involved in paediatric care to seek out and read the whole article, not least because it has an impressive and useful selection of references.  The final paragraph I would like to quote for you is:

“Wallis and Harper (2007a) identify that a mother-infant dyad with a cardiac condition falls anomalously between midwifery care and that of the pediatric nursing team. While each profession might focus on the care of ‘‘their’’ patient and scrupulously avoids trespassing on their colleagues’ territory, it may be argued there is no shared ideal or vision that supports mutual collaboration (Downe & Finlayson, 2011). Effective breastfeeding promotion and support in this most challenging of environments demands an absolute commitment by Child Health professionals to the principle and belief that breast milk is fundamental to a child’s short and long term health outcomes, and that this is auditable, achievable, and an asset to the clinicians’ practice and professional reputation.”

If I was in any doubt as to the necessity for the #hospitalbreastfeeding campaign, Dominique’s article makes it clear that improvements to support for those breastfeeding a sick child are a must.  In our blog post for NHS Change Day, Emma Sasaru and I outlined some simple things that healthcare professionals can do to improve the support they offer day to day.  Of these the one that I wish all HCPs could remember is this:

For more information on how supporting breastfeeding can help you in your role – and how you can be supported to help breastfeeding mothers – visit http://resources.heartmummy.co.uk/